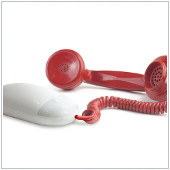 To VoIP, or not to VoIP, that is the question that many small- and medium-sized businesses have been asking. And with good reason, since placing calls over the internet with a “Voice over IP” system is an increasingly viable option for SMBs given the robust features, ease of use, and cost savings. But does VoIP guarantee crystal clear local, international, and intra-office calling?

Phones are an absolutely essential aspect of any company’s communications arsenal. And after Alexander Graham Bell made the first coast-to-coast long-distance call in 1915, it was clear that this was technology that had the power to transform business. But as with all emerging technologies, there were some kinks to work out.

Those earliest phones had power and leakage issues surrounding the wet cell batteries; more recently, cell phones have had their failings as well, such as dropped calls and short battery life; and today, VoIP technology has to deal with some minor complications, too.

The keyword, though, is “minor,” and our aim today is to help you identify these relatively slight hangups and help you optimize an already superior telephony solution.

It’s fun to hear your voice repeating throughout the high-walled canyon you’re hiking, but not so great when you’re having a quick chat on the phone. And while VoIP echo won’t totally disrupt your conversation, there are a few things you can do to reduce it such as adjusting volume and gain settings, upgrading your USB headsets, or even implementing VoIP echo cancellation software.

Many VoIP systems use an ATA, or Analog Telephone Adapter, to convert analog voice signals to digital signals. This sometimes produces static during calls, with the culprits usually being incompatible power supplies or feedback from the phones plugged into the ATA. Easy fixes include unplugging/replugging the ATA and/or the devices connected to it, or switching to IP Phones which require no analog/digital conversions.

The main factor in disjointed, start-stop sounding messages in a VoIP environment is packet loss, which occurs if individual data “packets” are lost in transmission. When this occurs, the gateway at the receiving end of the call tries to predict what’s been lost, but when it can’t, the gap in data remains empty. With a simple tweak to your VoIP system’s bandwidth settings, sending and receiving voice data will become smoother and significantly reduce these interruptions.

Commonly referred to as PDD in VoIP parlance, post-dial delay is fairly self-explanatory. It refers to a delay between the time the caller finishes dialing and when they hear ringing, a busy signal, or some other kind of “in-call” information. It can be a nuisance when, instead of the ringing being delayed, it never actually occurs and you suddenly realize that your call has been connected. This is actually an externality from a vital piece of VoIP technology known as SIP. At the moment the only solace we can offer is that its widespread nature means you’re not alone, and a solution should be coming along soon.

By now it’s clear to most SMBs that a VoIP phone system can benefit their business, even with the occasional delayed ring or scratchy call. Because what we’ve learned from previous telephony advances is that inconveniences like this are manageable; and we can help you manage. From VoIP planning to installation to optimization, contact us today for more information.