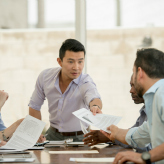 Is there anything worse than an unproductive meeting? The feeling of those minutes and even hours slipping by you as you sit ‘brainstorming’ with co-workers, only to leave the room with a big fat nothing. The frustrating part is that, when run effectively, meetings can result in great ideas, and can add huge value to your company. But how do you make that shift from pointless meetings to productive ones? That’s where Do.com comes in. Here’s how to make the change in your organization.

We all know that an unproductive meeting is bad for business. Wasted minutes turn into wasted hours, and wasted hours turn into wasted days – and so on. Not using any of your team’s time effectively – whether they are the COO or the receptionist – is a big waste of money, simple as that. On the other hand, you know that meetings are essential for regrouping, hashing out new processes, gathering feedback, brainstorming marketing strategies, and simply touching base. But if, over the years, your company’s meeting culture has gone from energetic and idea-generating to stale, uninspiring, and – dare we say it – downright pointless, it can be hard to turn that around.

The good news is that there is a way to swing the pendulum back in the other direction, so that you can begin holding meetings that are productive and, crucially, that STAY productive. And that’s by using a software platform called Do.com. Do’s purpose is to help companies of all sizes start running more productive meetings, and it has already been adopted by well-known clients, including tech giants Apple, Google and Microsoft.

Do aims to help make meetings enjoyably productive, too – after all, whether we’re a high flyer at Microsoft or the owner of a local law firm or beauty salon, we all feel good when we are contributing something useful. So, if you’ve noticed that, every time a meeting is held in your workplace, a groaning line of worker ants clutching iPads and notepads heads begrudgingly towards the meeting room, this could be your chance to turn things around and re-energize your employees. If you do it properly, you’ll get some great ideas for moving your business forward at the same time. It’s a win-win situation!

So what does Do actually DO to make meetings more motivating and productive? For a start, it helps structure them more effectively, so that more time is spent getting to the point and less time is spent discussing weekend plans, or moaning about other departments or staff. Do gives you the tools to properly manage agendas, notes and actions, as well as allowing you to share files that are needed for discussion. It also features a timer, which turns red if you overrun, so that you can set limits as to the amount of time devoted to a topic – ideal for reigning in those debates that go round in circles but never actually end up getting anywhere.

The founder of Do, Jason Shah, has stated that his goals with the platform are to “bring three central themes to every meeting: structure, transparency, and automation.” To help facilitate this, Do is geared to bringing an agenda to meetings, thus putting the end to directionless and ill-prepared attendees. It allows the meeting organizer to easily import notes from previous meetings, and upload relevant files or documents. This is something that will save huge amounts of time in the average workplace, where meetings are generally accompanied by a shuffling of notes and people going to print out forgotten documents, or to email the group mid-meeting. That’s probably not the kind of thing that Steve Jobs tolerated with any degree of patience!

Do also prioritizes eliminating the “so what do I need to do again?” factor that so often follows meetings, by centralizing information pertaining to the subject, as well as highlighting follow-ups and outcomes. The software prompts the meeting organizer to assign discussed tasks to a specific person, who then receives an email and push notification outlining the task, as well as a link to a dedicated meeting page, where further information can be found.

With other features that aid prioritization of tasks, plus analytics that give managers an overview of how their team, department, and indeed the whole company are spending their time in meetings, it’s little wonder that Do’s client list boasts some pretty high-profile companies. As well as Apple et al, other adopters of the platform range from social media big-hitters Facebook and Twitter to other tech clients including Dropbox and Salesforce. Consumer platforms, such as Netflix, Spotify, Uber and Airbnb, are also onboard – as are Disney, Domino’s Pizza, the NBA, and certain sectors of the US government.

It’s probably safe to say that these clients like the way that Do.com can be integrated with other tools and software such as Office 365, Google Drive and Docs, and Evernote. In fact, Do even considers its competitors to include other cloud-based productivity platform providers like Google Apps, Evernote, Dropbox, and Trello. However, Do.com has the edge on all of those by virtue of its meeting-centric approach. You may use Google Docs to work on a task after a meeting, but Do.com walks you through the whole process, from agenda to follow-up and subsequent meetings.

Although adopted by major players such as Apple, Google and Disney, Do.com is for use by companies of any size – including yours! If you want to learn more about productivity, including how to install the tools and how to instill the culture within your company, give us a call today.